China Legally Owns Every Panda in the World 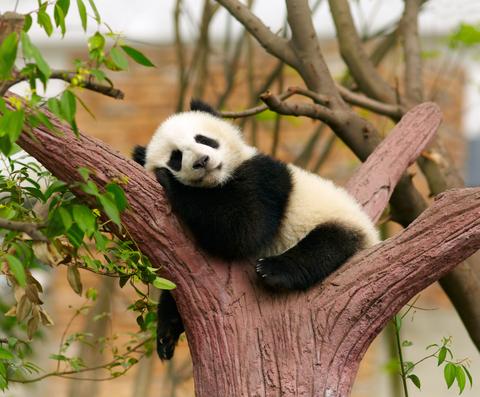 I am convinced that the Giant Panda, arguably the cutest animal on the planet, acts naïve, plays stupid and stumbles like a clumsy oaf on purpose. Here’s why. Other animals have distinctive means of ensuring survival in the true fashion Darwin conjectured when he went to Galapagos. Some animals shoot poison, others hold their breath for 30 minutes to an hour, some use tools and there’s the panda.

Pandas have to eat 80% of the time because their digestive system cannot efficiently absorb the bamboo they eat. They aren’t good at hiding, they aren’t really aggressive, and they don’t have powerful jaws that can snap a predator in half. Pandas suffer from low birth rates, high cub mortality, have been poached and are very vulnerable when they lose their food supply. This combination of factors has placed the panda on the brink of extinction and on the list of species that do not fit Darwin’s Survival Theory. They are extremely cute though. So in my opinion, the panda’s means to ensure survival is the compassion of a superior species, the human being. That’s why when they act cute and stupid people just love them; they love them so much they’d do anything to protect them.

China has taken the lead on panda conservation the world over and has used the panda’s allure as a means of raise funding for their efforts. The country, which has a monopoly in panda habitation, has decreed that all pandas are the property of the People’s Republic of China. After declaring this, which no one really contested because they have no pandas of their own, China then began a program of panda diplomacy by renting these pandas to other countries’ sanctuaries and zoos. The aim of the campaign is to promote awareness of the panda, bring joy to the people who see the pandas and of course, to showcase China’s greatness as the Middle Kingdom. The cost of leasing a panda is a whopping $1,000,000 per year payable to the Wildlife Conservation Association of China. In addition to this, whenever a panda cub is born, he or she is also considered property of the PROC and thus subject to panda rent.

This program has been very effective in helping out the pandas. Several panda sanctuaries all over the world have taken the steps necessary to normalize the dwindling panda population that is estimated at 2,500 in the wild. Aside from the panda diplomacy efforts led by China there are also other means to support the propagation. These efforts are a must to ensure our grandchildren know how Kung-Fu Panda really looks like versus wondering if the Good Dinosaur really looked the way he did.

Aside from patronizing the panda exhibits and taking that step of volunteering to take care of a panda (the list is actually a really long one and is screened very diligently), you can also opt to purchase from brands that support endangered animals. A startup I created called Endangered Apparel has taken this bold step. We have an entire line of clothing that includes a Panda Shirt line. These shirts composed of panda polo styles and different panda clothing are designed in a very classy fashion. On top of that, 20% of the profit goes to saving the panda by contributing to our very own Smithsonian National Zoological Park, which has a Giant Panda Conservation effort in place. The Smithsonian includes 18 museums, galleries and of course the National Zoo in our nation’s capital.

Let’s do our best to keep the pandas alive for many years to come. We need to share the cuteness for our posterity.