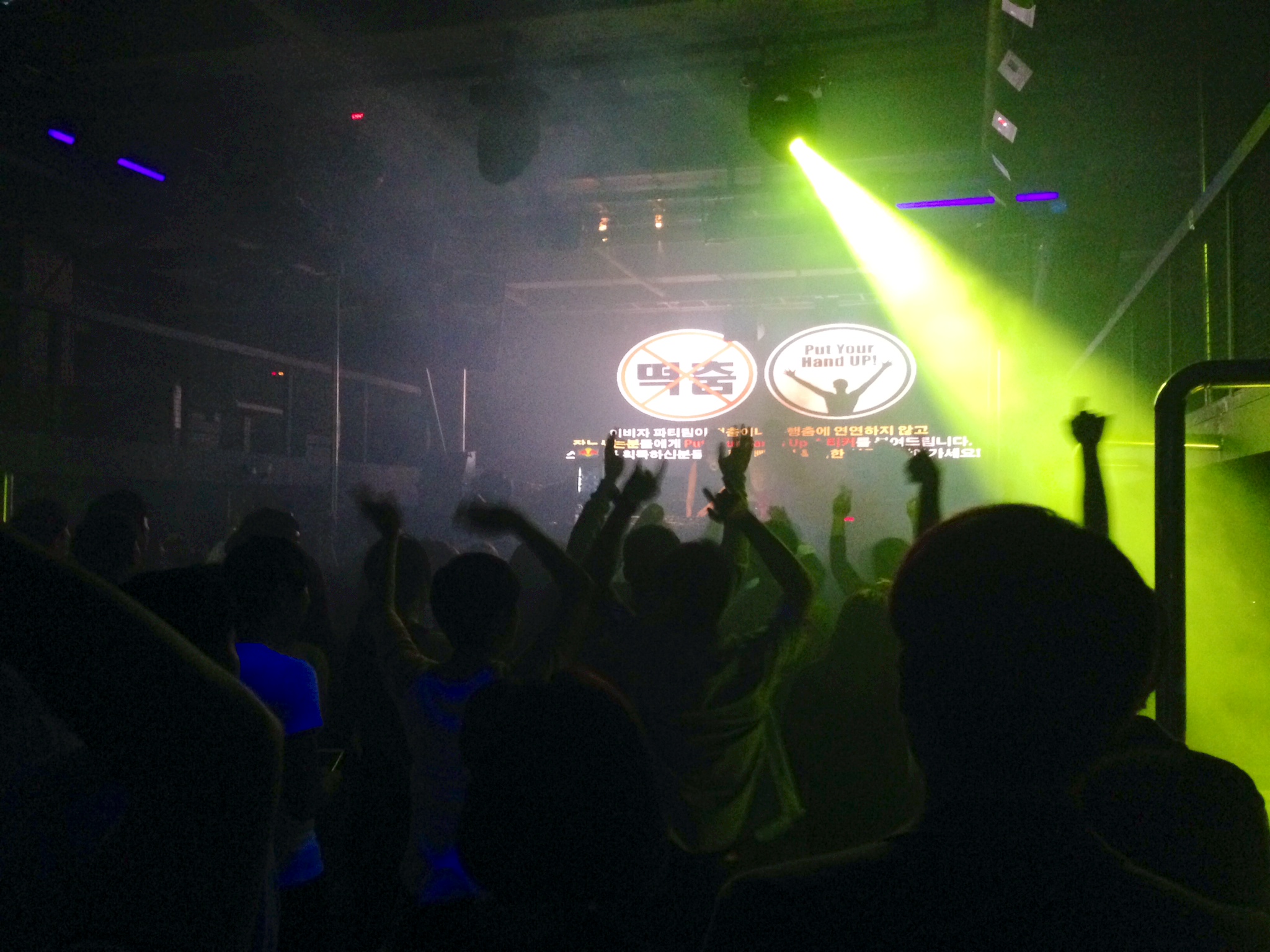 This weekend I headed to Club Ibiza to explore more of the Club Life in Gwangju. Saturday night was headlined by two expat DJs, DYAD. There is a good chance you have noticed the white cars driving around bumping loud techno music and sporting a big Ibiza logo. The club has taken a cool marketing approach and I was ready to see what all the fuss was about. Ibiza is a “hybrid” club, which gets their name from the Spanish island decorated as the party capital of the world.  The layout is a lofted mixture of a lounge and club. So depending on your mood you can spend time dancing or relax at a booth. Saturday night had a great 1 + 1 drink special for foreigners and the place was packed at 4am, which is their peak time.

The duo, DYAD is made up of John Gaska and Travvy G. John has been DJing all over Korea for the past few years and has played some huge shows. Currently he is managing an online magazine, ElectRow and still finding time to make some great DJ appearances. John is originally from the US, but has been living in Korea for the past four years. Travis (known as Travvy G), hails from Queensland, Australia and has resided in South Korea for over 6 years. Since 2009, Travis has worked for numerous media outlets, such as TBS eFM Seoul, Mnet America, and since 2012 he has hosted and produced the music program for expats ‘In the Mix’ on GFN 98.7FM in Gwangju.

“Travvy G” is also a club DJ, who performs under the moniker ‘Valda’, a name taken from his grandmother. You may have seen him perform at local establishments like Speakeasy, Club Link, Volume, and recently Club Ibiza. His style of music consists mainly of House/Tech House, but he believes in playing to the crowd and adjusts his sets accordingly.

You can catch the “Aussie” daily from 10pm, by downloading the free ‘Tunein Radio’ application and searching “GFN”. ‘In the Mix’ keeps the listeners up-to-date on the latest music news, new releases, and gig info.

I caught up with Travis yesterday and this is what he had to say after their set:

“Last night was the big one, John Gaska and myself hit the decks for the first time as a duo, under the name ‘Dyad’. Our set was scheduled for 1am and 4am, however the management thought it would be better we play one big session from 3.20am. At first we were hesitant, but soon realized that Club Ibiza is the sort of place that get’s extremely busy, late.

We approached the $10,000 dollar Sony CDJ-2000 Nexus set up like kids in a candy store. For me, it was the first time I had the pleasure to perform on such a quality piece of technology. A little bit overwhelming with more buttons and knobs than a space shuttle (cheesy, I know).  Nevertheless, we were away!

After a few minor hiccups, we found our groove. Alternating from mic to mixer, we got the crowd really psyched. The cool thing about this club too, is that the team try to encourage the crowd to feel the music, and avoid the infamous “Gwangju Shuffle” or “떡춤” in Korean.

The sound system is massive, with heaps of room to dance. There’s also a second floor balcony if you wanna kick back and enjoy a drink while watching the DJ/crowd, and of course private VIP tables all around, with a clear acrylic sound barrier so you’re not screaming in your friend’s ear.

Shout out to the expats who came along, everyone was having it large! I even saw some random dudes with their shirts off, loving it. We played a solid 1 hour set, and the music was high energy. I even busted out a “Mick Jagger” chicken dance on stage! Lol. Good times.

Thanks a bunch for all the insight Travis! It is always great to hear about the other perspective.  The Ibiza experience was great and I’ll definitely be back again. You can find more information on Club Ibiza through their Facebook page.