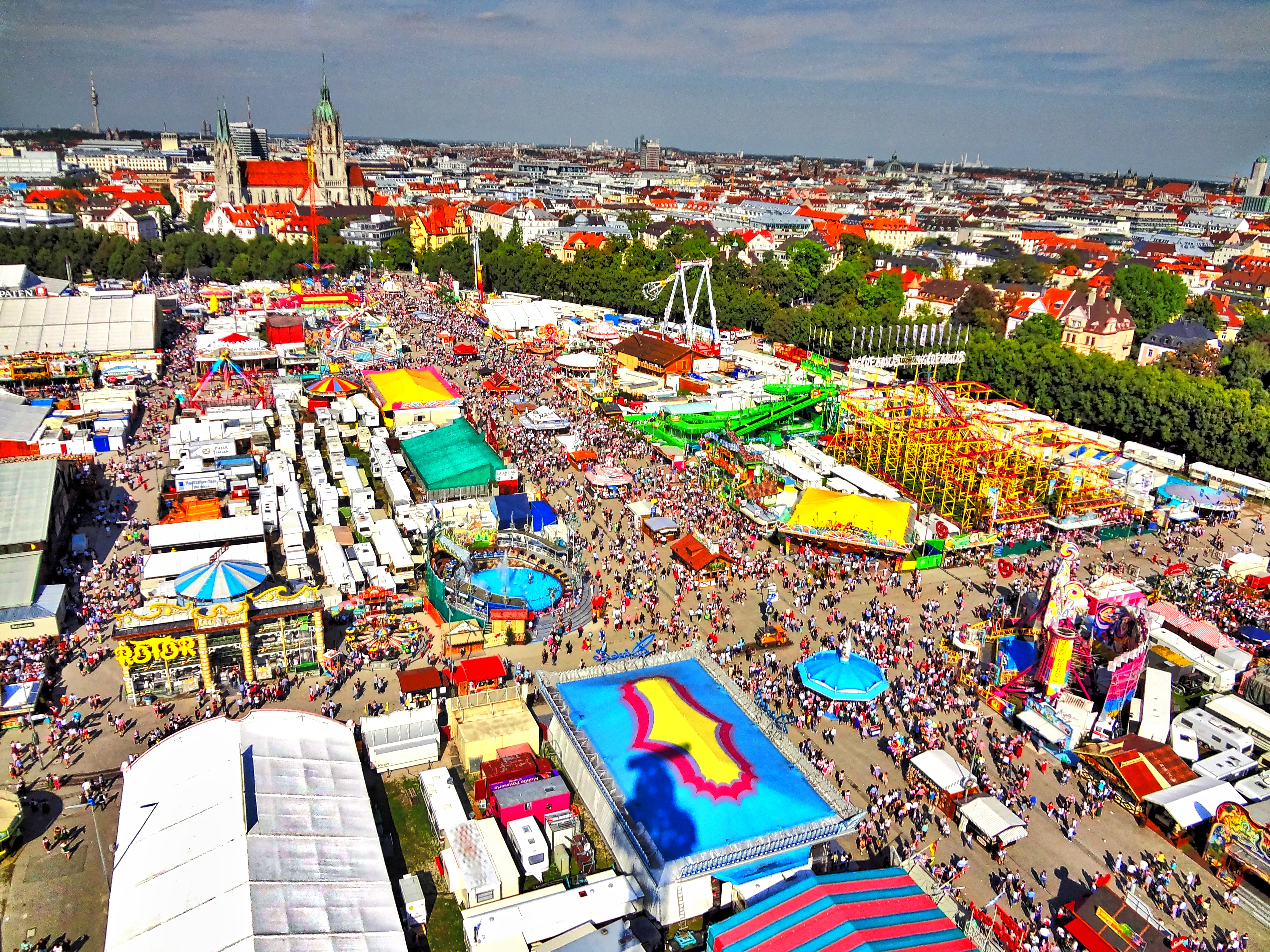 Do you remember that feeling after spring break? You have been on a 5-day/night drinking bender. Broke, sunburnt and exhausted.  You went hard. The last thing you want to do is drink for at least a few days.

This is exactly how I felt, but I had been doing this for almost 3 months now. Extremely worn out and all I wanted to do was rest. I had just returned back to Prague. The previous 3 months were spent traveling to 15+ countries around Europe and my final month was spent working a Pub Crawl in Croatia (where I was paid to drink in a Paradise city on the beach. yeah…dream job!)  More about that later. Anyway, I was living out of a backpack for three months…and VERY excited to get back to my left behind wardrobe. I had 5-6 shirt rotation…and got tired of those shirts quick.

I had just gotten off a plane and back to my room in Prague…all I wanted to do was sleep and get ready to start my full time job in two weeks. However, an opportunity to check something off my bucket list fell into my lap. Oktoberfest was this weekend…and Munich was only a 4 hour drive from Prague. I knew it was going on, but had no plans at all to make it there. Due to the fact accommodation fills up at least 6 months in advanced.

People normally plan trips to Oktoberfest months, sometimes even a year in advanced. I was lucky to have a friend in the “Tourism Biz” who had a free spot in his car and a place for me in a hostel (Mad props to Isaac: Owner of one of Prague’s Clock Tower Pub Crawl).  6 million+ people visit Oktoberfest during the 16-day span…this was an opportunity I could not pass up!

I had 2 days of rest and then packed up my bag and we headed off for Munich. It was a quick 4-hour drive in our Skoda, racing on the Autobahn (no speed limits!) We checked into our hostel and went out for a few liters of German Beer.  Tomorrow was opening day of Oktoberfest aka “die Wiesn” to the locals. We took it semi-easy because to get a seat in a tent you need to be there EARLY…we were up at 6am.

Opening day of Oktoberfest in Munich

6 am rolled around way too quick. It was time to head off to the main tent. We hopped on the metro and did not bother getting a ticket.  We stopped outside the main gate for an early morning photo shot, and then headed to the most crammed line I have ever. It was full of local Germans and some very young Germans (age 15 accompanied by an adult and 16 to drink by themselves), it was going to be a local spot as we knew beforehand. This was my buddies 8th Oktoberfest, so he knew how things were going to go down. We got to the line around 6:30am and waited there until 9am when they opened the doors…I was ready for some beer after the sardined packed line. I’m not going to lie, It sucked. Unfortunately, beer was not served until noon. Nevertheless, our tent was the most important one of Oktoberfest. We were in the Schottenhamel tent on OPENING day. The first keg would be tapped in this tent and first beer poured by the mayor.  We got to drink the opening beers of Oktoberfest 2011!

The doors have just opened and it was a mad dashed push to get through this bottle necked door. Huge German door guys trying to make sure there was some order to this madness. Once inside it is a freaking war zone trying to get a table.  You cannot save seats. We had our full table ready and sat down next to two Germans who immediately got up and left because they were trying to save seats.

We finally got our table and all we could order was a Fanta/Coke mixture (that was actually really good), but I was craving some BEER! Noon came around very slowly, but finally it was beer ‘o’clock!!! It was 9 Euro per liter of beer. (We tipped our server 100 euros at the beginning so we would get served first, it takes forever after a while to get served if you do not tip.) There was a huge ceremony in our tent for the tapping of the keg (all in German) which was entertaining and of course great German music to go along with it. After many liters of beer, it was time to head outside of the tent.

Ahh, outside the tent is where you really experience a great part of Oktoberfest. You start by drinking a lot of beer, go outside to stuff your face with food, and then finally hit up all the carnival rides.  What a great order of events. We went outside and you really are a kid at a carnival for grownups.  The rest of the day got a little blurry, but I made it home safely to the hostel after a great festival. 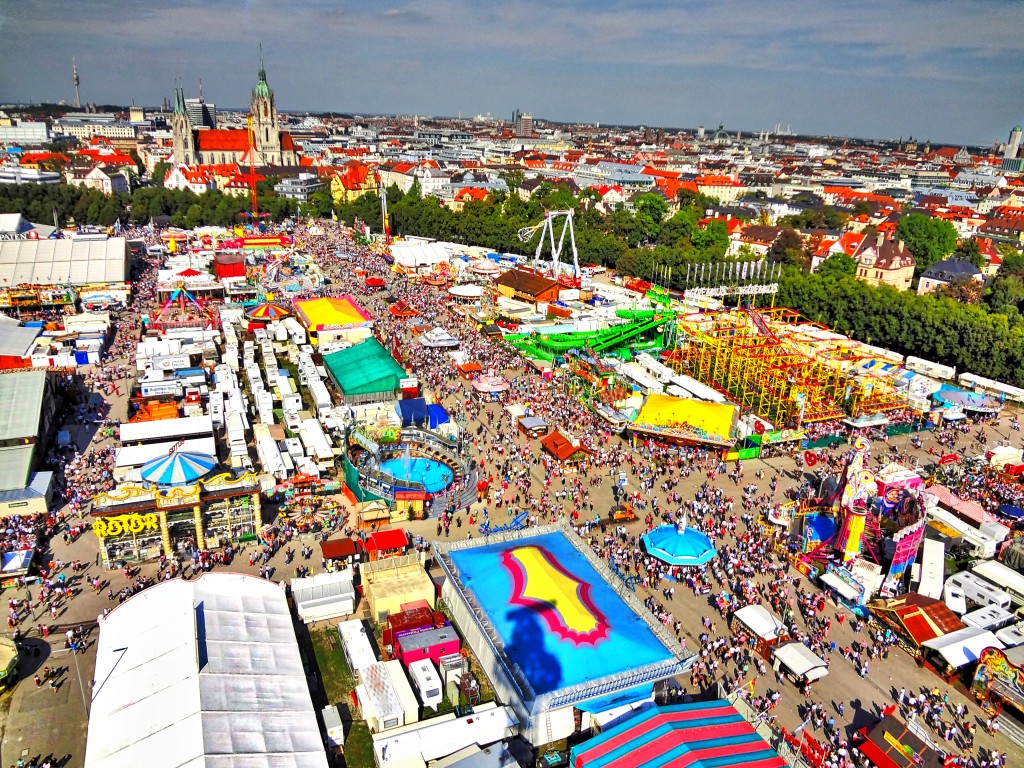 (This is taken from the top of the ride that “drops you” which is not really fun, but great photos)

So how can you make it to Munich’s Oktoberfest in a more organized fashion???

After using multiple tour companies around Europe….I always recommend my favorite to friends traveling Europe: bus2alps.com. They have an awesome business model that puts together incredible trips for young travelers. (Fun groups, highest rated hostels, and is cheaper than if you did it on your own.) It is always more fun to travel in groups and less stressful when the trip is planned out for you!
Click here for the Oktoberfest Fest Tour I would have done if I had planned ahead!