Running with the Bulls: Survival Guide 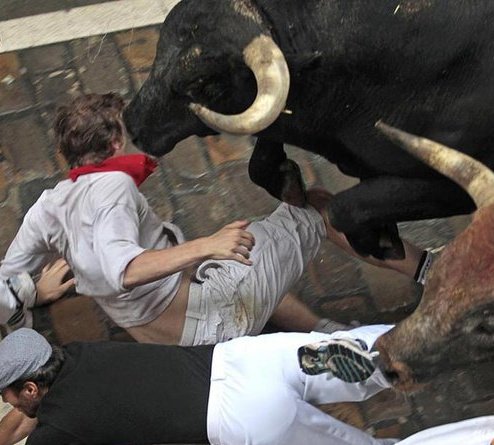 It was crowded, hot and very humid aboard the sweat-filled bus. The majority of the passengers were cover head to toe in white clothing. Some sporting red scarves and handkerchiefs (that’s actually how you spell it…no joke). We had just hopped on a bus in Madrid and were heading to Pamplona, Spain to RUN WITH THE BULLS!! Whilst on the bus we were told about one of the coolest travel groups, Friday Night Club. (Click here to read about it)

I was traveling with one of my best friend’s, Drew. We had no reservations when we got to Pamplona, but we did have a bit of a plan.  Plan: Spend 3 days sleeping in the park and check our bags into the bus station. We said the first night would be a calm night; so we were well rested to run with the bulls the next morning. First part went well, but there are no “calm” nights at the festival.

After arriving in Pamplona we went to check in our bags. During this we met three really nice English guys and decided to form a bit of a group. The original plan of not drinking and taking it easy was over within about an hour. The five of us checked in our bags and went out to start exploring the city. Pamplona is a fairly small place, but the thousands of people make it seem massive. We walked out of the bus station to a splendid display of fireworks followed by a bit of rain.  My first thought was, hope the rain goes away due to the fact we plan to sleep outside for 3 days with no tent or cover. The rain slowly dispersed and it was time to get some sangria inside of us. There were people everywhere, live music and so much else going on.

After indulging on a few things of sangria it was time to enjoy some beers underneath the cover of patio umbrellas. The night was still very young and it was time to play a few of the famous drinking games and meet some other festival goers. After this we were off to explore more of the festival. A short stop for a bathroom break turned into an all-out WAR. A SANGRIA WAR! Apparently this is the popular thing at the festival. Dumping loads of sangria on each other. (I just think it is a waste of perfectly good Sangria!)  After all of us were very wet and sticky, we decided it was time to continue on.

The English bros picked up a few sangria flasks and notice how we all are very messy after the sangria fight. Our clothes were bleach white and new about 4 hours ago.

After picking up the last few things of Sangria it was time to head off and check out the bar/club life of Pamplona. The streets and bars are packed with people, but it is spread out enough to make them still enjoyable. We bar hopped for the next few hours and before we knew it the time was 6:30 am and the run would start at 7:30 am.

So we headed off to take a quick power nap for 30 minutes. We found ourselves the most comfortable part of Pamplona, a very well kept fountain in the middle of a roundabout. We all had a nice nap and shortly after the sun was coming up, this meant it was time to head off to a run I will never forget. The rain had made the course slippery and since it was a weekend, today would be packed full of runners.

We gathered inside the running track and do a few stretches and get in the zone. I was really just hoping to not get gored by a bull. We started right at dead man’s corner after a few suggestions from other runners. This would allow us a good run of the course and let us make it into the stadium (hopefully).

After all the anticipation we finally hear the gun shot. You can only imagine until you see massive bulls running towards you, parting the sea of people like Moses. After the shots fired we dart off, about 45 seconds later people start moving out of the way and running for their lives. It wasn’t this simple though, it was chaos. People were tripping over others and causing massive pile ups.

See if you can Spot Me on the Right Side!

Luckily I made it safely into the stadium despite a small collision with another runner. The run seemed to happen in the blink of an eye. It went so fast, but the satisfaction you get making it safely into the stadium is unexplainable. There are thousands of spectators cheering you on, but the adrenaline rush continues. During the run most of us were split up. After a bit of searching we ended up regrouping.  Once you make it into the stadium they release bulls into the ring (with corked horns).  They are still very dangerous, but won’t be able to gore you!  We witnessed a few people get tossed and sent to the hospital. This is when I got a few chances to touch the bulls, getting your hands on the bull is so exhilarating. They let about 6 bulls out at different times and after this the stadium empties out onto the streets. Someone either gets gored or is killed every year, luckily we all made it out safely (well sort of).

After the stadium started to clear out and the 5 of us regrouped we noticed one of our friends was extremely disoriented.  Our buddy Stewart told us he had been trampled by the bulls. I’m thinking he just fell and got hit by a few people. He barely had a scratch on him! (Well a few scratches and slight concussion). I kept thinking there is no way he was trampled by bulls. My thoughts were soon proven wrong.

Throughout the streets are professional photographers taking pictures of the bull run, you can go to a building and see if you made it in any of the pictures (Similar to after riding a roller coaster at Disney world).  We ended up finding a good one of us and another photo where we can see Stewart’s feet up in the air and a bull jumping over him. The photo looks like he should be in the hospital with very serious injuries.

The next day one of our buddies Garf noticed the same picture was on the front page of the local newspaper. What an amazing picture. No way could this photo ever be topped! At least not with a more serious injury. The rest of the day we slept in the middle of the park on towels (it’s normal and hundreds of other people are doing the same thing).

Stuart made the front page

The next few days were spent walking around and playing around at the carnival.  Make sure you actually watch the run and make it inside the stadium. It is great to see the run from the other point of view. It’s free to get into the stadium and watch the run. The festival has a lot to do, but I think 3 days and 2 nights is perfect. It was time to head back to Madrid! We had not showered for 3 days, it is definitely was one of the nicest feelings.

Remember: It is not possible to out run the bulls. Unless you started too close to the stadium. In this case you will run into the stadium early and get chanted at by thousands of fans calling you a pussy and throwing stuff at you (because there is no risk starting at the end).

A few tips & rules about the run: