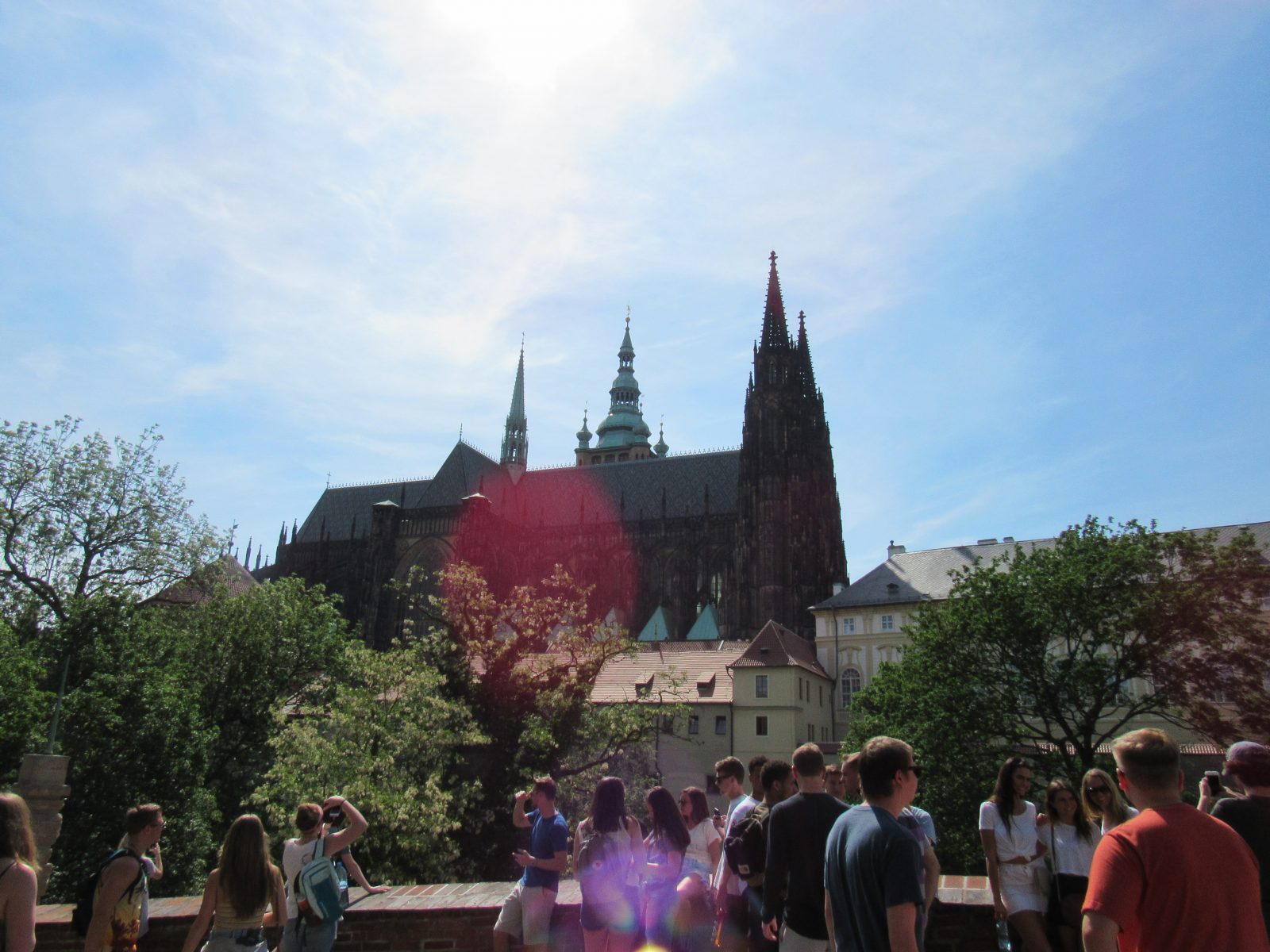 My journey began in the Saint Louis Lambert Airport, somewhere that I haven’t been in about five years. The challenge began with something as simple as just trying to figure out where exactly I was supposed to check my luggage. It turns out that, at least for international flights, you have to check your bag inside. I only learned this after starting out at the wrong counter.

Once my luggage was checked in it was time to find my flight. One of the main things that I realized here is that airports are really big and sometimes a lot more confusing than I think they need to be.

Another huge surprise to me was that you have to go through customs even when you’re going to a connecting flight. This can make running to your next flight even more stressful. However, the line guards are usually very understanding if you show them your boarding pass and they may allow you to skip to the front of the line.

The first day seems to be the most complicated, especially if you do not sleep a lot on your flight over. I felt like I was in another plane of existence by the end of the day because I had been up for more than 24 hours at that point. 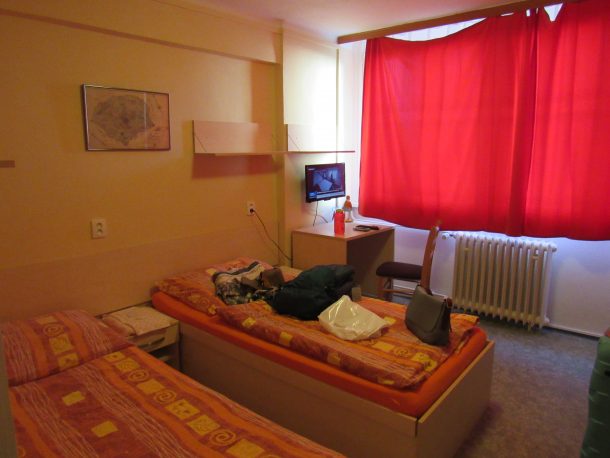 My room for the first week

After my plane landed, I was brought straight to my home for the first week of my trip. Since I was the first student to arrive, I had plenty of time to set up all of my stuff and relax a bit.

I decided to steam the dress that I have shoved into my carry on the night before so that I could wear it without any wrinkles. I set my dress to steam as I took pictures of my room.

Minutes later, I found out that I had in fact accidentally flooded the entire bathroom and half of the walk way. I had only been in the dorm for thirty minutes and already was I having a minor crisis.

Tip of the day: If all you have is a shower head, make sure the bathroom is not prone to flooding before you walk away with the shower on.

Later that day, after more students begin to arrive, we decided that we were going to try and figure out the public transportantion situation that night.

We were able to find one of the recommended beer gardens called Letna. As you reach the top of the hill that the Letna Beer Garden, you could see the city stretching for miles. It was truly spectacular. 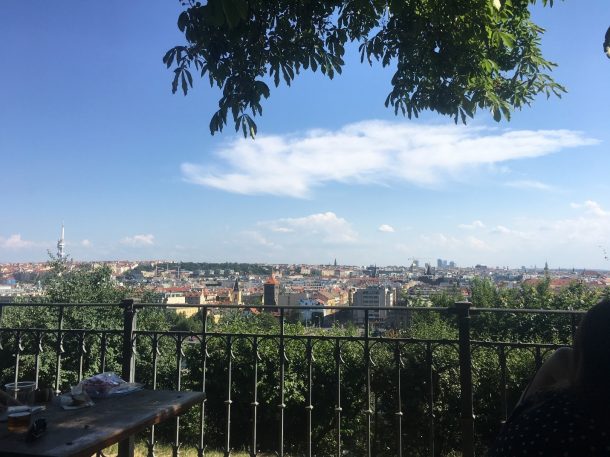 View from our table

It was also pretty amazing to find out that beer was only 35 Czech Koruna (~$1.60). Czech beer truly is cheaper than water in most cases. 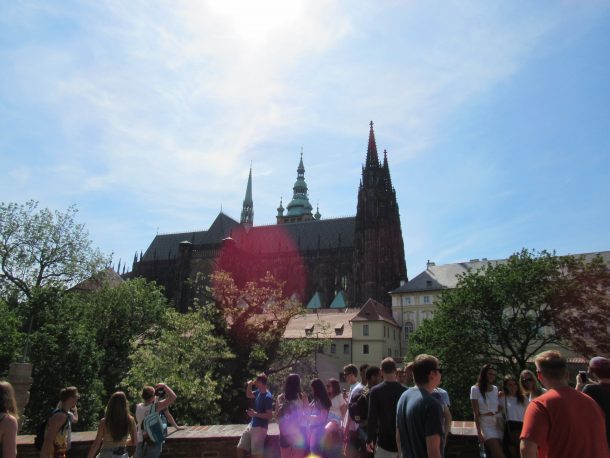 The second day, we were brought out to explore the city and learn about public transportation from the people who use it every day. It was also one of the first days that we got to interact with any of the Czech Students. This day trip to the middle of Prague was our first real look at the city. 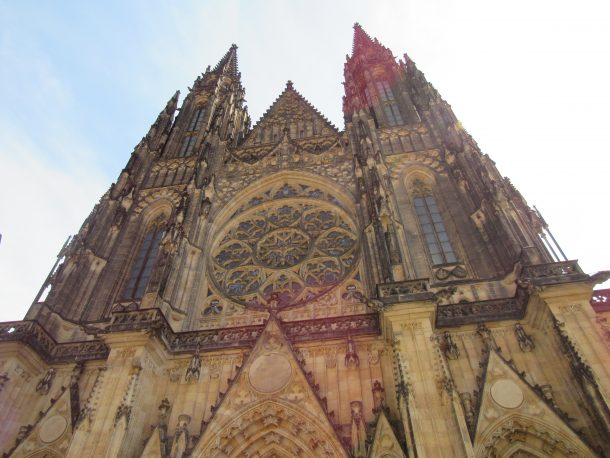 First we made our way to the Prague Castle grounds. From what we learned, Prague Castle is the biggest castle in the world. The architecture there was especially amazing. While on the grounds, we were also able to visit the chapel. After that,  we began to make our way towards the Charles Bridge.

As we were lead to the famous Charles Bridge, we stopped at the John Lennon Wall. Even though I did not have any clue what to expect, I was stillsurprised by the wall. It was covered in colorful graffiti and there was a guy singing songs written by John Lennon. According to my recent Google search, the John Lennon Wall was originally a place for Czech students to air their grievances about the Communist regime. That fact adds even more layers to the already interesting wall. 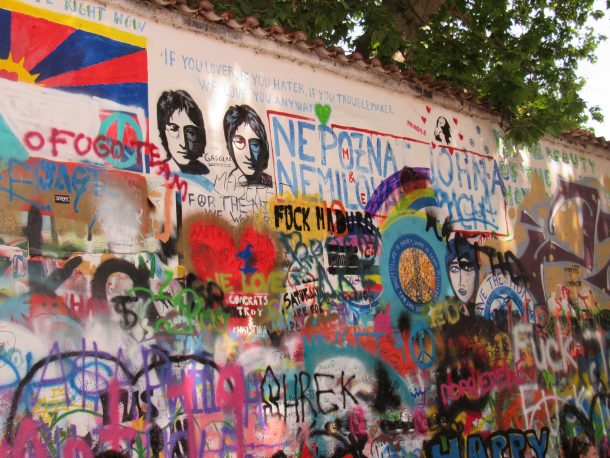 Finally, the group made its way to the Charles Bridge. This beautiful bridge is covered in old religious statues as well as many street vendors and performers. While all of the statues have been replaced and are no longer original, they are all very interesting, each style a little different than the last one.

After we saw the bridge the group was led to the middle of old town square. We were then told that our goal for the day would be to find our way home. It was a very long, but exciting day. 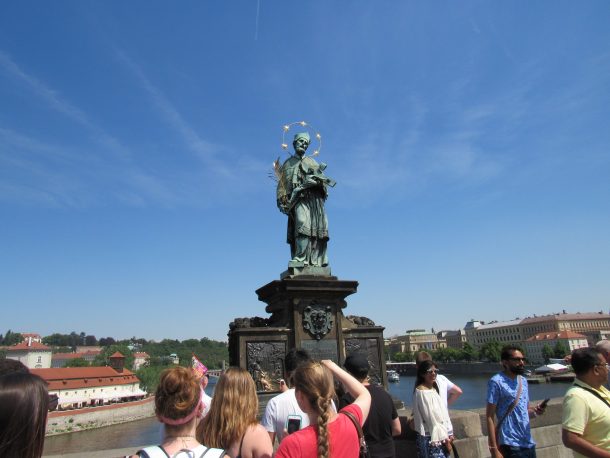 When I said that I was going to study abroad, many people joked and called it party abroad. They were all wrong. When we finally started our classes, I was surprised to find out that we had two two hour long classes a day. Not only are these classes long, but they are packed with information. However, they are all very interesting.

One of my classes is an International Finance class. In this class we work in groups with other Czech University students and go over case studies. I find it very interesting to hear the opinions of students who are not from America. It also is helping me make friends with some of the Czech University Students.

My second class is one focused on marketing. This one is a bit difficult for me because of I have only taken one introductory marketing class. However, I think that this class will be even more interesting for me since I do not know a lot about marketing already.

Thankfully, there isn’t a ton of homework and projects in my particular classes. Unfortunately, the other two classes definitely have a fair share of work.

I think that everyone who wants to study abroad needs to remember that there will still be school involved. It is important to remember that you are learning as much about the culture in the classroom as you are out of it.

Even though I have only been here a few days, I feel like I have learned so much already. My main regret so far is that I did not learn enough words in the Czech language before I came. I wish that I could at least order food in the language. My main advice so far is to get to know the students from the University you are studying abroad at. The students will be able to teach you so much about the city you are in. They are also really cool people.

Overall, I would say my first few days here have been a success! 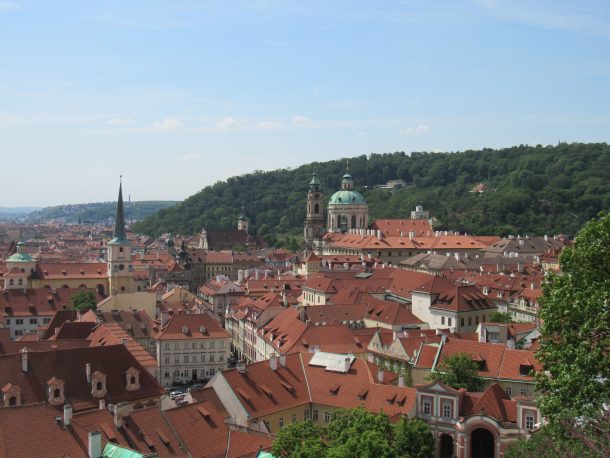 View of the city as we left the castle grounds