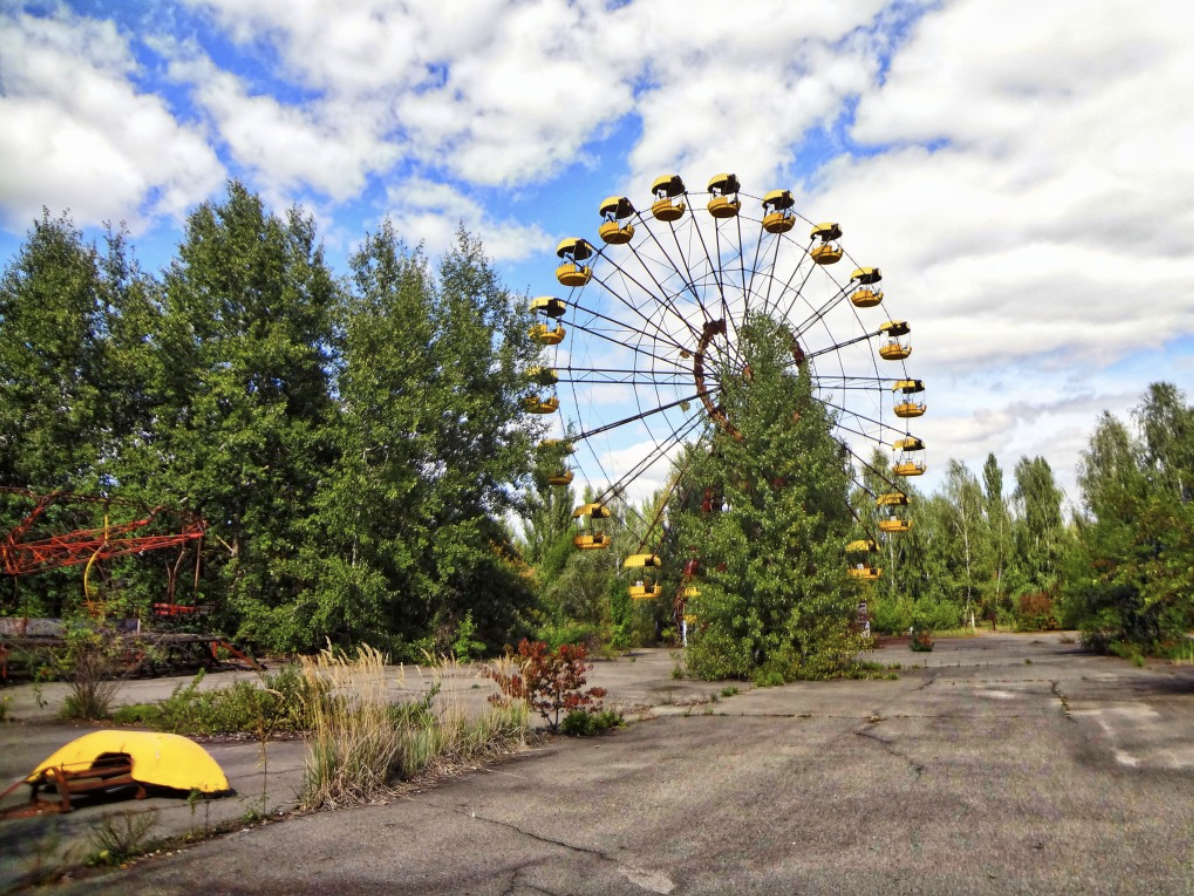 Kiev… a beautiful part of the less explored Eastern Europe. It is a modern city with this sort of New York-esque vibe to it. It is hard to explain, but it seemed like there were always people on the go and dressed for any occasion. There is an underground city; a labyrinth of shops, malls and food stands in the heart of the city.  Ukraine was amazing, but the incredible Dutch friends I met along the way made it an unforgettable 5 days in Kiev. However, Kiev is not the focus of today’s post. We are here to discuss something a lot darker and less vibrant; the worst nuclear disaster of all time. Visiting Chernobyl, Ukraine was a once in a life experience.

Today I will be discussing my tour inside The Chernobyl Exclusion Zone. I will be providing all the details you need to book your tour from Kiev->Chernobyl at the end.

It was a beautiful morning; I had drunk a little bit the night before. Peer pressured by the Dutch friends in my hostel.  Luckily, I had prepared a snack for the morning, because I was running late to the meeting point and it would be a long day. The tour left from Dnripo Hotel  at around 9 am. I hopped on the bus…paid the driver 680 Ukrainian Kryvna ($85)…went straight to the back, put on some Sigur Ros and passed out. (trust me the drive is not that scenic.) About and hour or so later I wake up to some guy speaking broken English and asking for my passport…I awake very confused and handed it to him, hopped out of the van to see this.

For some reason the security guards did not want to let us through. It took about 30-45 mins of waiting at the checkpoint. We were just outside of the 30 kilometer zone (18.6 mile perimeter from the nuclear reactor explosion)…a few AK-47 yielding Ukrainian guards were between us and The Zone of Alienation.After a bit of a wait they told us to get on board and we began our tour of Pripyat and Chernobyl.

Our first stop would be at a peculiar museum filled with mirrored floors and ceilings. There were random items floating in the museum. It is hard to explain so take a look at the picture below.

After this short first stop it was off to visit the creepiest place by far I have ever set foot in. This is the type of place that I will never forget. It is the basis of some video games/movies. The pre-school. A radiation filled, run down, destroyed pre-school to be more exact. Filled with headless teddy bears and kids toys…this place was the eeriest of the tour. . Pictures do a better description than I can. 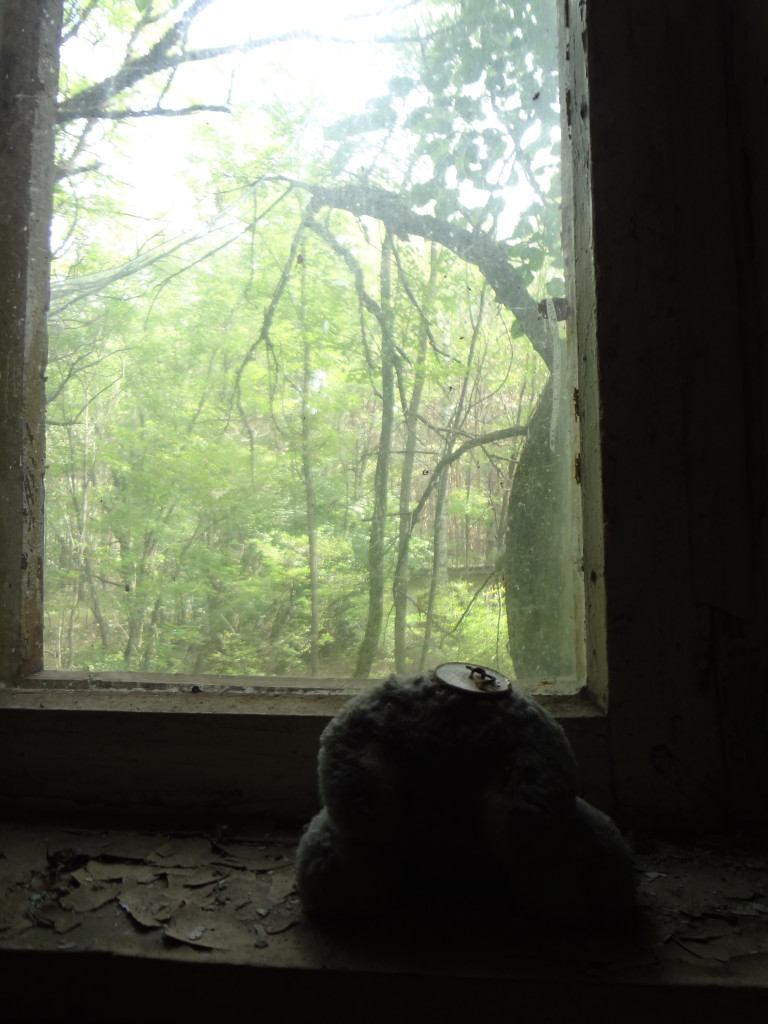 After leaving the pre-school we headed off to check out a far view of the reactors. Finally, this was the first glimpse of the reactor where it all began. Later on, we went a bit closer, but it was still pretty far. I was completely okay with being a safe distance from huge amounts of radiation only covered by a lead building.

The next stop was off to some building ruins. We were required to wear long pants and a long sleeve shirt to be on the tour. Luckily, the weather was perfect for this attire. We were recommended to wear a facemask, but I only put on for this photo op. 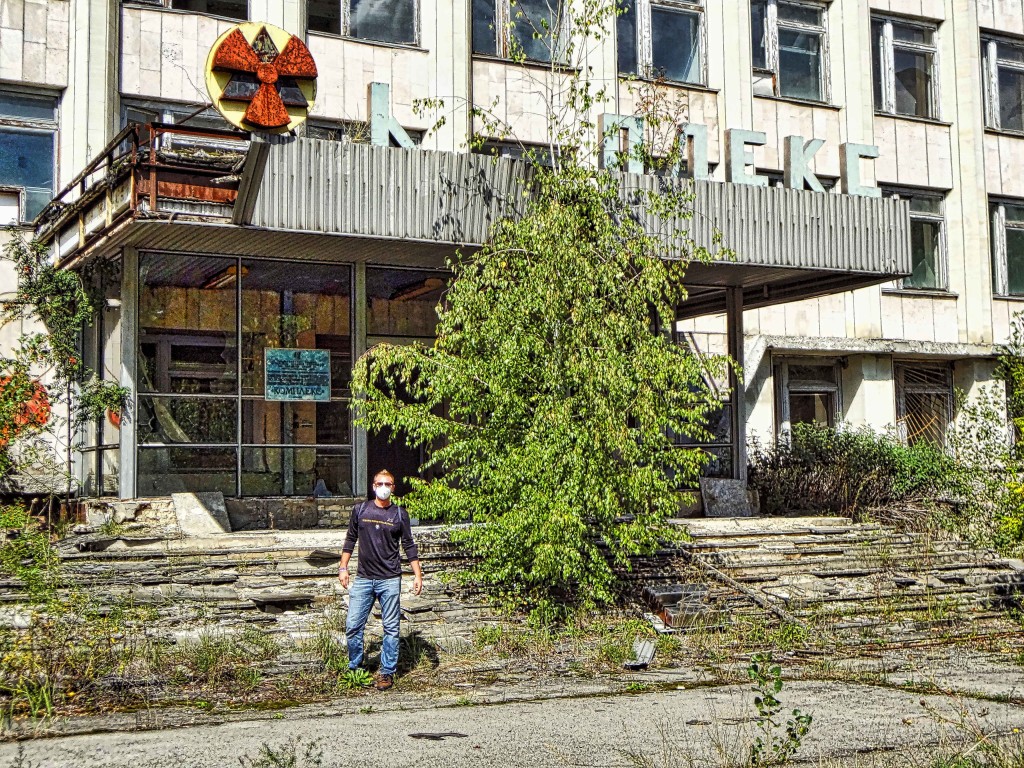 After walking around and exploring some of the ruins of the city we finally got to the walk to the most famous known part of the tour. The “circus area” filled with rundown bumper cars and a decrepit ferris wheel. This is something I had pictured in my head from movies and video games, but had no idea what to expect. 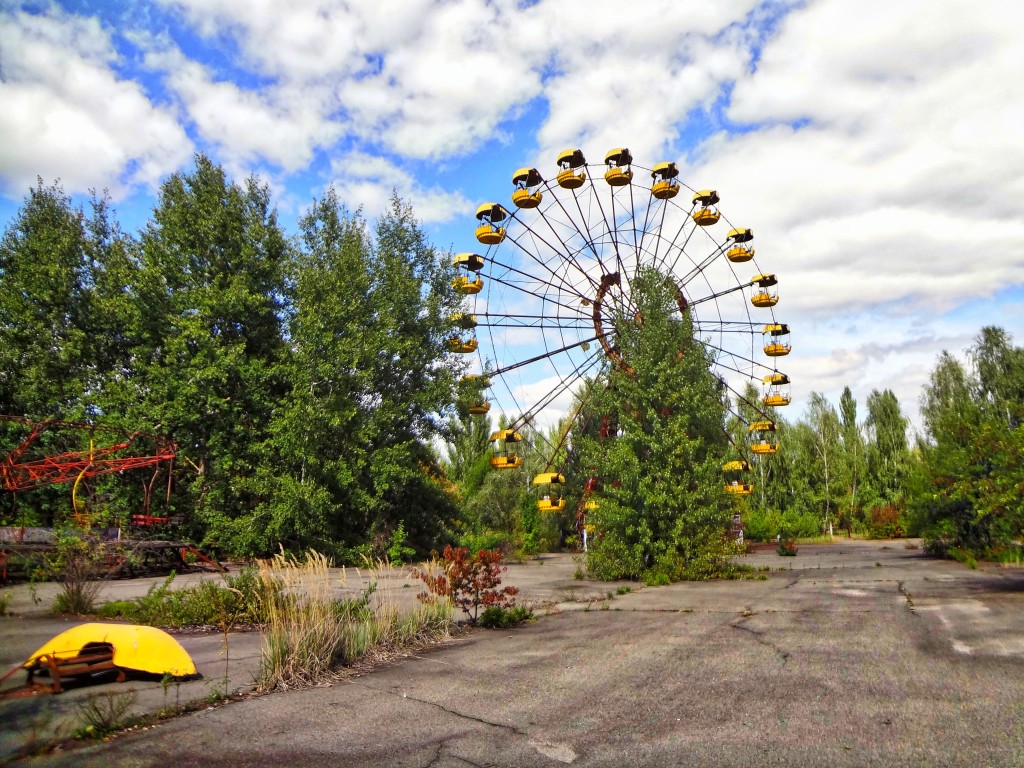 We were only allowed to stay around the circus area for around 15 minutes due to the fact it was one of the highest zones of radiation.  After leaving the circus, we headed to walk around an abandoned soccer field. The city of Chernobyl was filled with mostly families of the reactor plant workers and was said to be an upper middle class type of community there. Before we could enter the place for lunch we had to be tested for radiation (lunch was surprisingly good). These tests would happen once before lunch and two times on the departure of the tour.

After lunch we headed off to feed some ginormous radiation catfish…the biggest catfish I have ever seen up close. We threw them some bread and headed off for a closer view of the reactor.

Once outside the reactor we were instructed to not take any pictures or video of the construction happening next to the reactor.  So to explain the current situation in a few sentences. Chernobyl reactor explodes…dump lead into the reactor to block radiation…then build a giant lead sarcophagus around the reactor. This was a temporary fix. What we couldn’t film was the construction of another sarcophagus that is going to go over the current one. It is going to be like a box inside of a box full of radiation. The project is extremely underfunded and behind schedule by years. The reason for this being is that Russia takes no responsibility for Chernobyl and is providing no money to clean up their mess.

Me in front of the main reactor holding a radiation detector.

After touring the main reactor, it was time to head home. On our way out we would be stopped for radiation testing 2 times before we could leave. Overall this was an amazing tour and a once in a lifetime chance to visit something on my bucket list of historic sites.

The documentary gave me a lot of information that was not covered by the tour guide and I am extremely happy to have watched it beforehand.

Check My Travel Resources Page for the best sites to book your next trip.

Read below to learn about how to book this tour:

First things first: You must book at least 11 days in advance to do this tour. There is a little bit of paperwork and arrangement that goes into this tour. And honestly it was a bit of a pain while backpacking to book this tour, but well worth it. Mainly being you need to fill out, sign and scan a letter To The Ministry of Emergency Situations of Ukraine. This was a pain because I had limited computer access, so keep this in mind.

Okay, so there are like 3 or 4 tour companies to book a Chernobyl tour. All of the other tour groups get approval from this main Government guide. Click Here. So I suggest using this one since they are the original and just recently allowed other tour groups into Chernobyl. Their website looks like a 10 year old designed it, but they really are legit and they gave me a student discount, so make sure to ask.

The total cost of the tour was $129 ($45 paid for a reservation fee upfront) and the rest paid on site in Ukrainian currency.

The tour includes an English-speaking guide and transport from Kiev. The tour group was about 14 people. They only allow so many people per day. The tour also included a big lunch, more food than most people can eat.